Last week the Shelton School Board  voted to shut down the high school pool. Pool supporters are protesting. I love to photograph protests, so I that is what I went out and did.

I really liked this picture, I felt like it was a winner even before I shot it.  Cute kids following the rule of thirds, what more could a photojournalist ask for?


I submitted several photos of this scene including a two photo panorama.  The paper used my panorama. 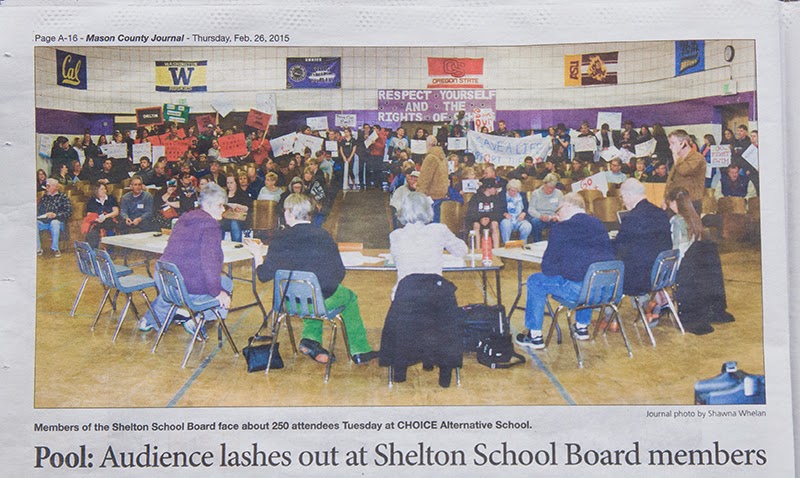 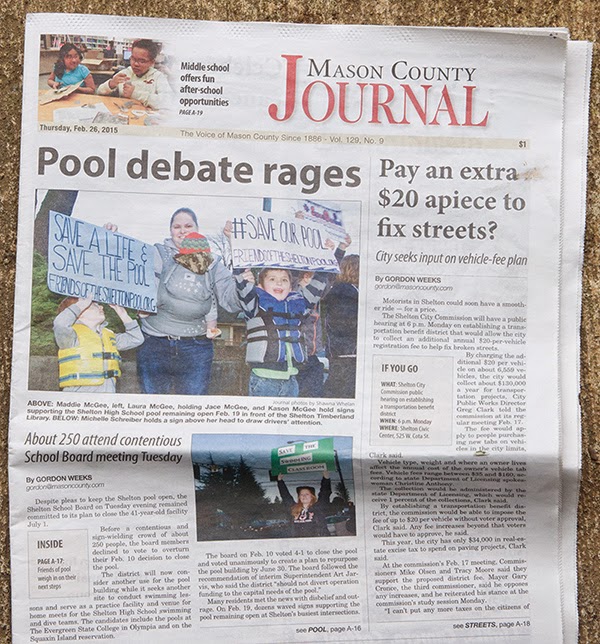 I was outside photographing protesters when I realized that the shot I really wanted was the view from the school board, so I ran upstairs and took this shot through the window.

Later pool supporters had a meeting of their own in the Civic Center.  The Civic Center has nice lighting, but the ceiling is probably too high for bouncing my flash.  I did bounce my flash of a wall for some shots.

I was given an assignment to photograph the Reagan Legacy Dinner.  I was given this assignment just a few hours before the start of the dinner.  Since I'm freelancing for a weekly paper I normally get my assignments days in advance.  I was told that I should dress conservatively for this job.  I really wish I had gotten closer to my subject.  I was too nervous and the room was very dark. 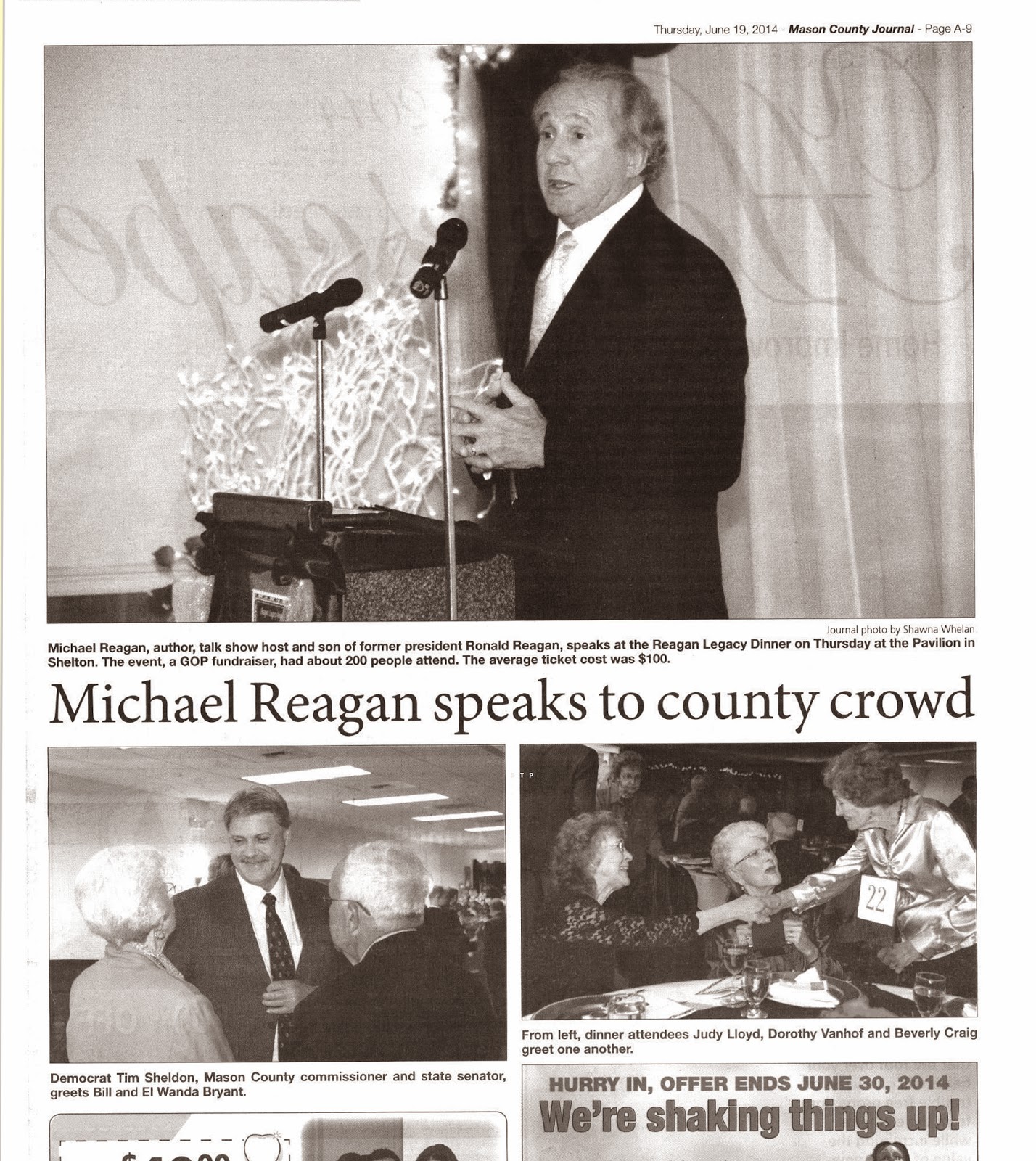 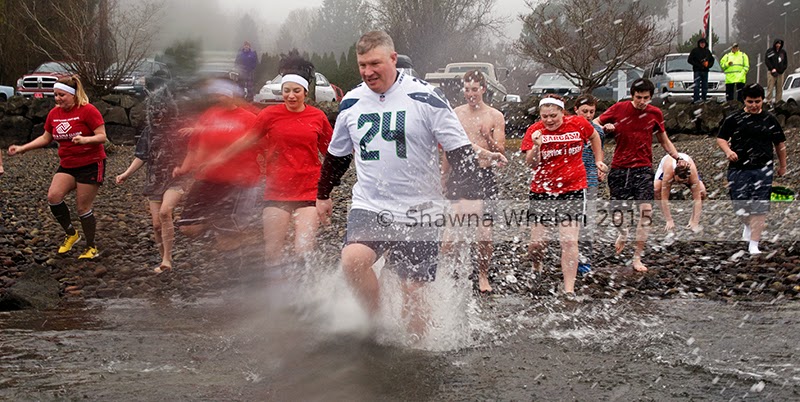 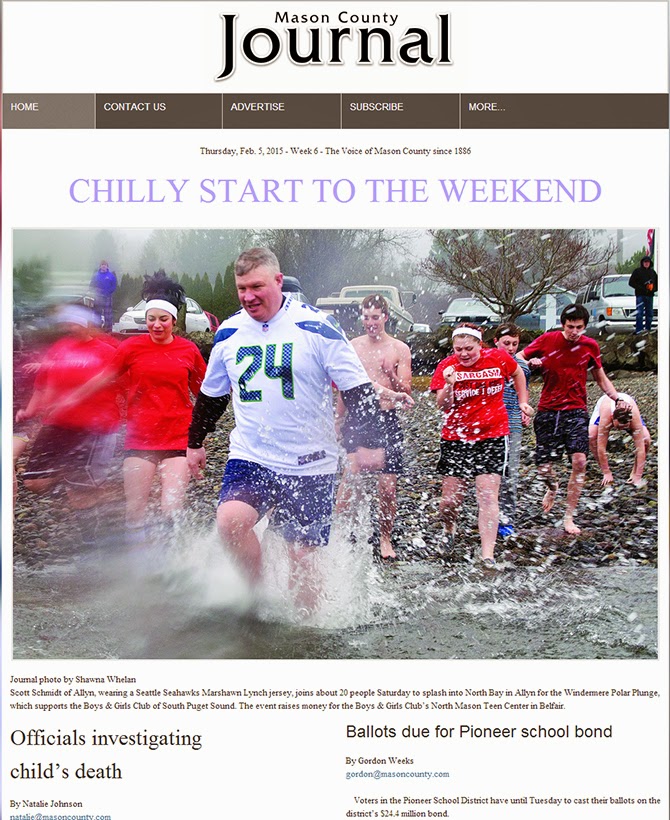 I got to shoot a polar plunge this weekend.  I felt a little bit intimidated by this assignment because the publisher of the paper that sent me to photograph this polar plunge won awards for his photography of a similar event just last year.  I set the bar for myself very high and I wondered if I could meet my own expectations.

I thought about my assignment some more, what would be the best angle?  What is the most cliché angle?  It became clear to me that if I wanted to get the best shots I needed to be in the water.  I could stand on the shore and get maybe one shot of the sides of the participant’s faces and then have to shoot pictures of their backs or I could stand in the water and get close pictures of the participants faces.

Okay, so I was going to stand in the water, but was I the first to think of this?  No, of course not.  So I searched again,  but this time for references to photographers standing in the water while shooting a polar plunge and that is when I found  Meryl Schenker's blog: http://merylschenkerphotography.com/2010/01/25/special-olympics-polar-plunge/.  I read her blog post and  I saw something that made me think twice about my idea of standing in the water.

“This was actually my first time photographing a polar plunge and I learned a lot about where to stand and where not to stand as saltwater splashed my expensive camera gear, which thankfully appears to be fine. A couple of colleagues were apparently not as lucky as they lost their equipment to the sea.”

Uh oh!  I had no desire to lose my equipment to the sea.  Maybe it was time to rethink this.  It was late in the evening and my shoot was to be early the next morning, but I sent  the blog author Meryl Schenker  an email  in hopes that she might have the time and inclination to answer me.   I told her that I was about to shoot my first polar plunge and I asked her what she had learned about where to stand.

While waiting for an answer from her I decided that I would shoot the polar plunge with my cheapest DSLR and lens.  I would use my Nikon D40 with the 18-55mm stock lens.  I can shoot great photos with this set up in spite of it being cheap and it would not hurt as much to ruin it with salt water.

Meryl  wrote back to me.  Her instructions were to stand in the water and wear waders while trying not to get knocked over or get my camera wet.  From that I gleaned the other photographers who lost their equipment to the sea probably got knocked down.

I don't own waders, but I decided to stick with my plan to stand in the water use my D40.

When I arrived at the shoot the next  morning the weather was overcast and foggy. I took a couple of test shots and I knew that  I was going to have to shoot with an ISO of  at least 640 if I wanted to get a good shutter speed and enough depth of field to have most of my subjects in focus.  My D40 would not be up to the task.  The D40 does not handle ISO very well above 400.  The D90 is good to about 800 and acceptable up to about 1,600.

So I went with my D90 and my 17-50mm 2.8 lens.  In other words, my best gear.   I decided to minimize splashing by only going out knee deep and I went so far as to ask the organizers to ask the participants not to knock me over or splash me on purpose.  Of course I was going to get splashed a bit, but I did not want to get caught in the middle of a splash war with people purposefully splashing me.

Twice last year while on assignment, people splashed me and my camera on purpose.  I had water squirted at me at both the Tahuya Days Parade and at Oysterfest.  Both times it was done on purpose by people trying to have fun with me, but not realizing that there is nothing funny about  getting water on an expensive camera.

When it was time for the plunge the events happened quite fast.  I did not have time to get into the water before the countdown started.  Thankfully the organizer, who had forgotten about me, paused the count at 5 to ask the participants not to knock me down and then the count resumed from 5.  I did not like being the center of attention but I was glad that the participants were warned of my presence.

I had been hoping that it would be done quietly and I never imagined that it would be done in the middle of the countdown.  At least the pause gave me time to get into position!  I was not happy to have my presence interrupt the event and I hoped that it did not constitute some sort if ethical breech.  Another newspaper had a reporter/photographer there.  What was she going to think?

I had planned on standing where I could focus on the participant who was dressed as a leprechaun, but I was lucky to even make it into the water on time, so I just stood right in the middle of the oncoming line and took pictures of everything that caught my eye.

By the 6th picture I had water on my lens, I reached for the lens cloth that I had kept handy in anticipation of a wet lens, only to find that the pocket I was keeping it in was wet.   The cloth was too small for me to quickly dig out of  my now wet and sticky pocket.  I grabbed a larger washcloth I had and I used it instead.

The washcloth was not perfect and it smeared water on my lens but I had to keep shooting as the event was going to be over fast.  With water smeared on my lens, my camera had a little bit of trouble focusing so I did not get as many shots as I wanted as quickly as I wanted them.  I fired away as quickly as I could and I hoped for the best.

Then while I was still in the water photographing the last folks who were coming out of the water, I realized that some of the participants were already leaving in their cars.  That meant I would not be able to get their names for the cutlines.

However, through the magic of facebook I was able to at least get the names to go with my favorite shots before the deadline.

I got a few drops of water on my camera body and on the outside of my lens, but my camera is just fine.  I used a UV filter over the front of my glass to protect it from any splashes.

Shooting this event was a rush and I want to shoot more of them now.  There is another plunge next weekend, but that job has been given to a staff reporter.

Email ThisBlogThis!Share to TwitterShare to FacebookShare to Pinterest
Labels: Community Events, Weather
Newer Posts Older Posts Home
Subscribe to: Posts (Atom)
The previous theme of this blog was "Wandering the Empty Streets of Shelton Washington Looking for my Stolen Bicycle"