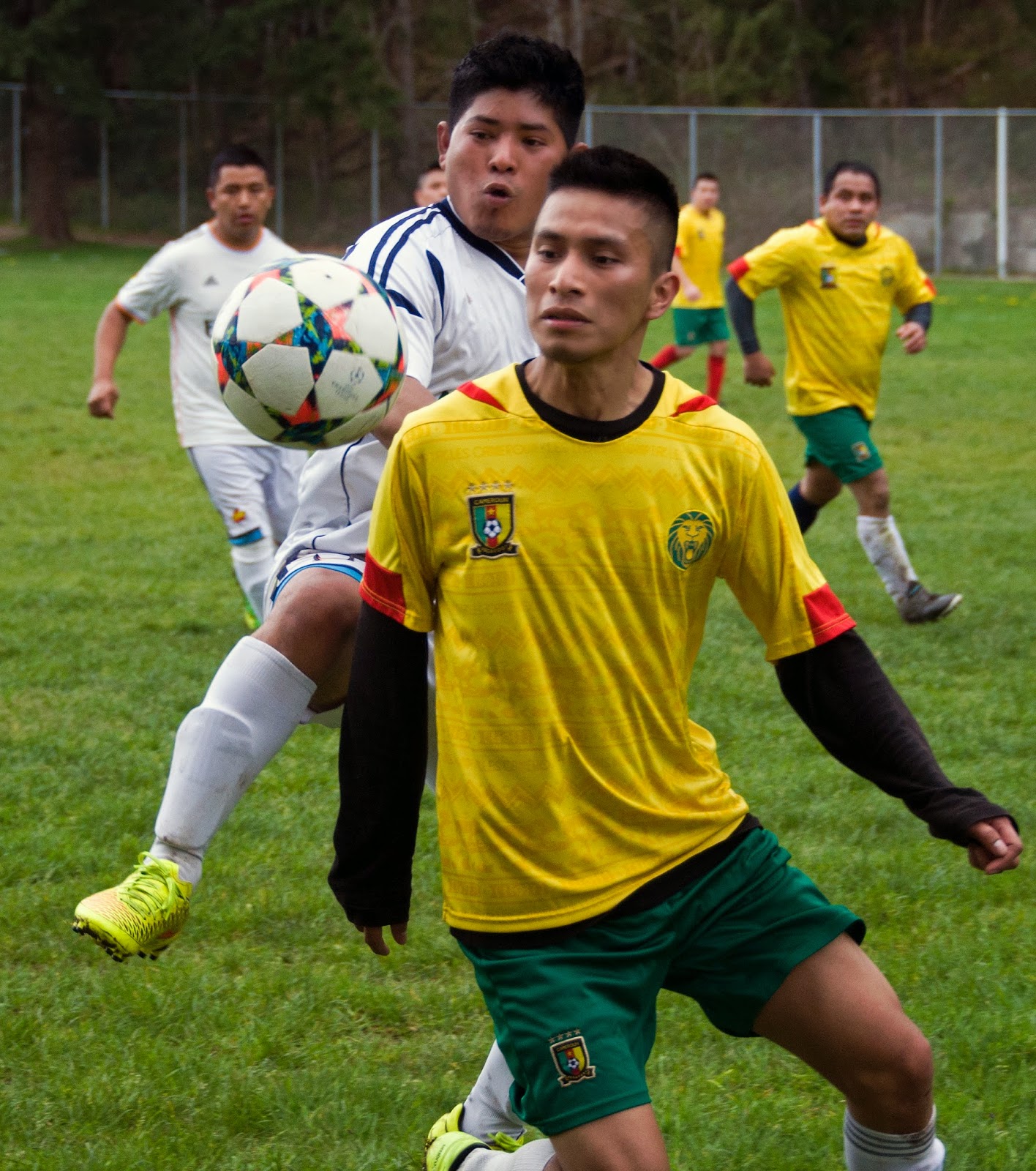 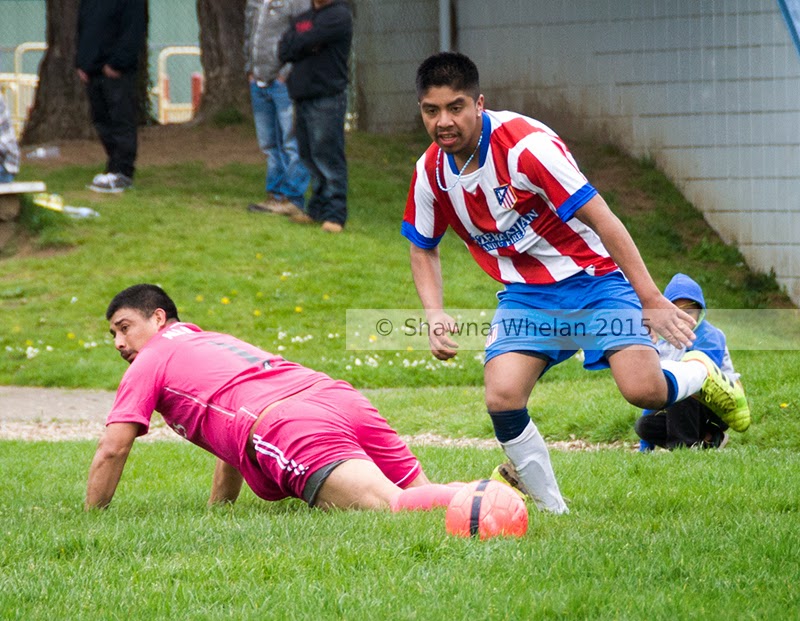 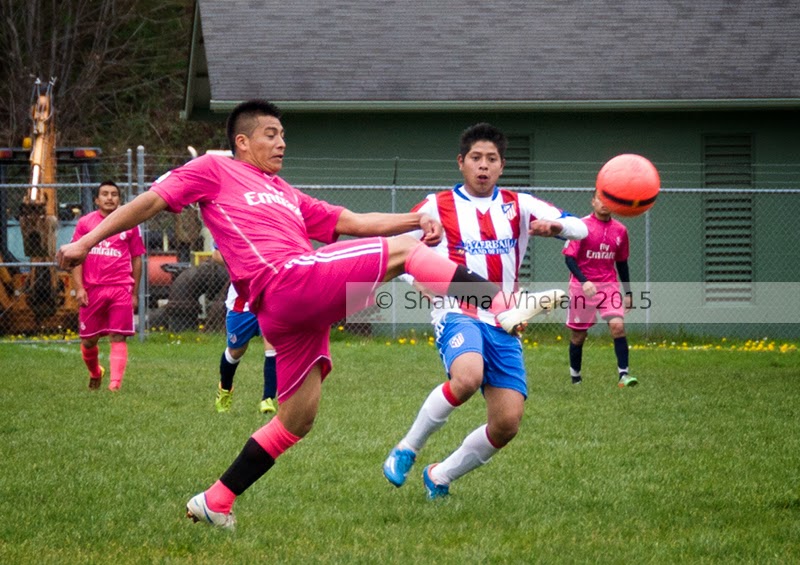 This week and last week 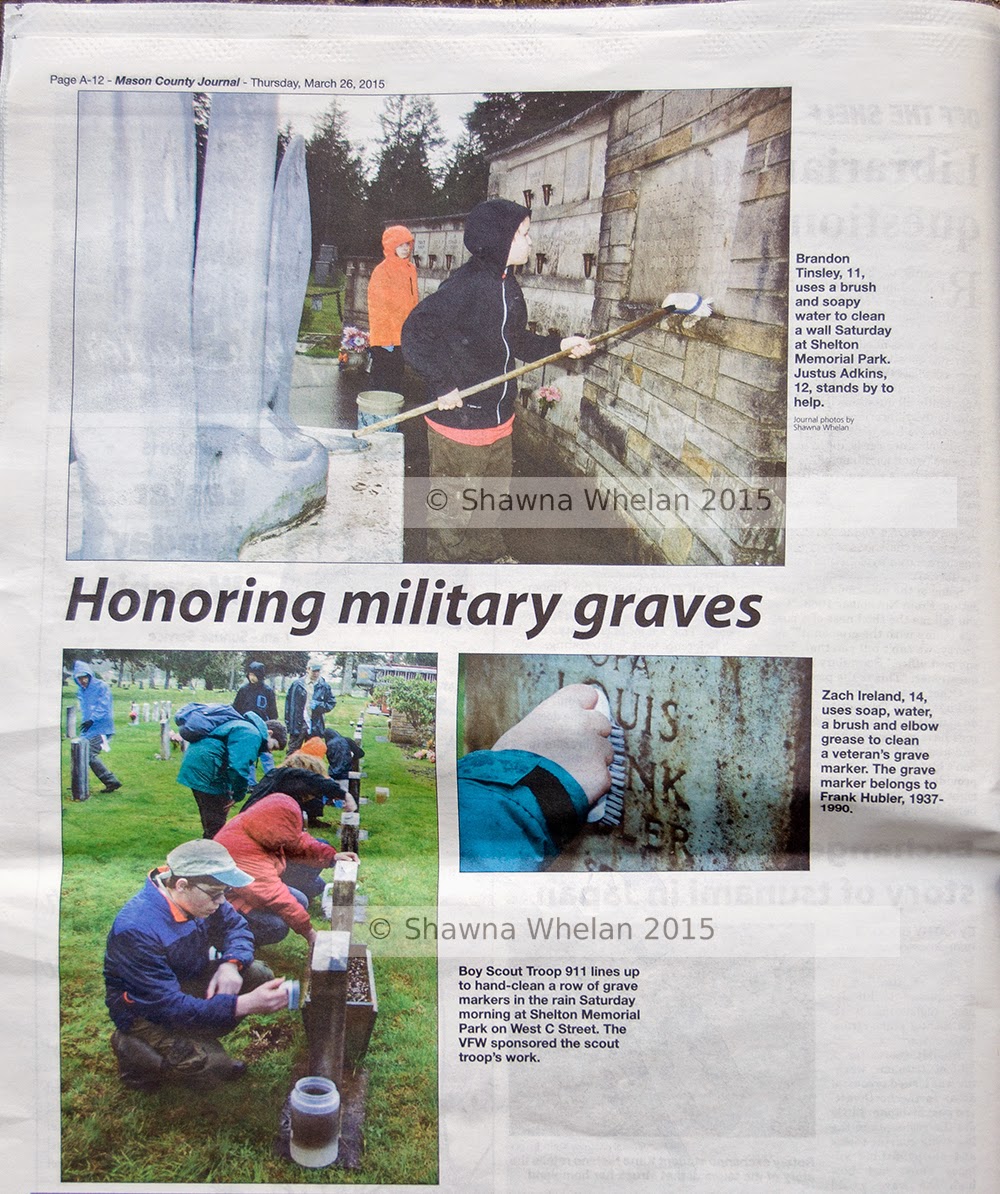 I went to Shelton Memorial Park to take pictures of boy scouts and the VFW cleaning military graves in the rain.

Two weeks ago I photographed a sing-a-long movie with little girls dressed as princesses.  The paper sent me to photograph it, but my pictures did not go in the paper, I did not ask why.  I suspect that they ran out of room. 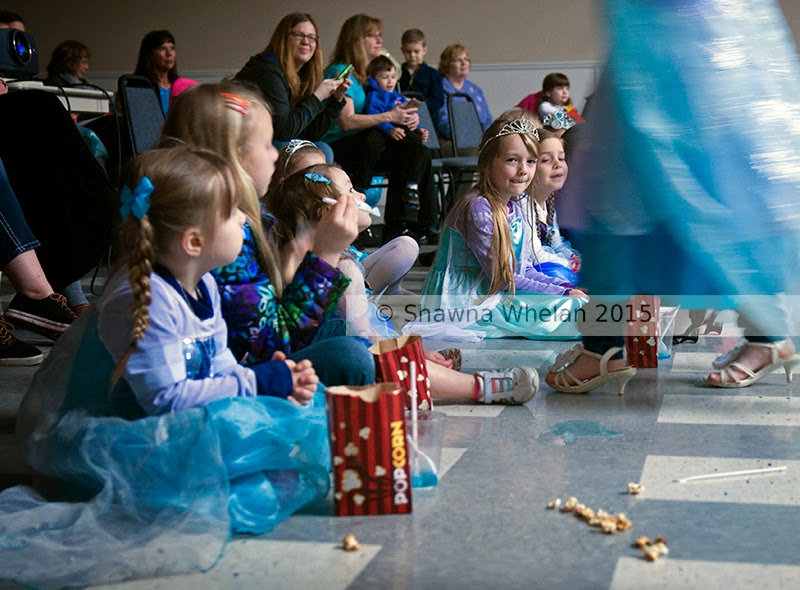 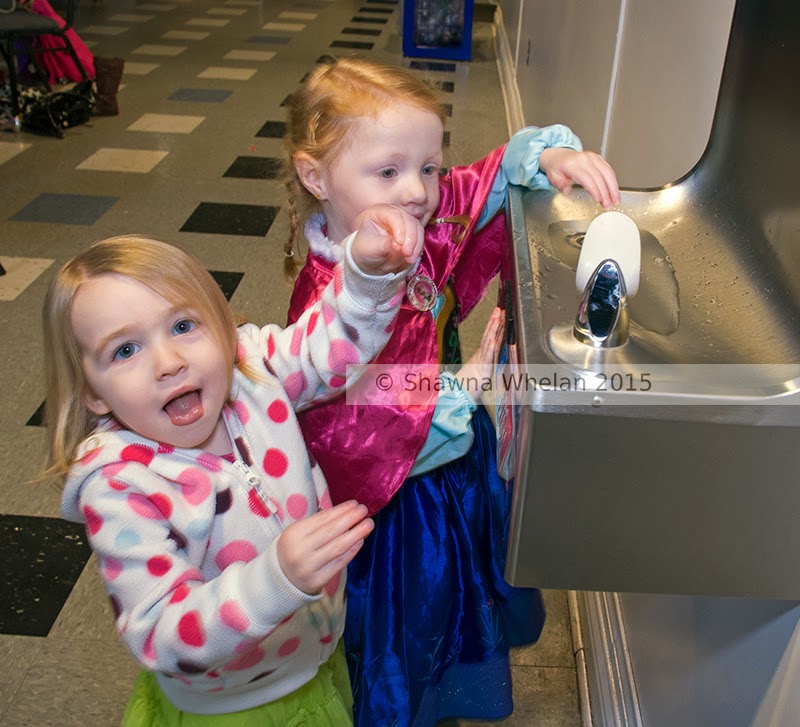 Email ThisBlogThis!Share to TwitterShare to FacebookShare to Pinterest
Labels: Assignments 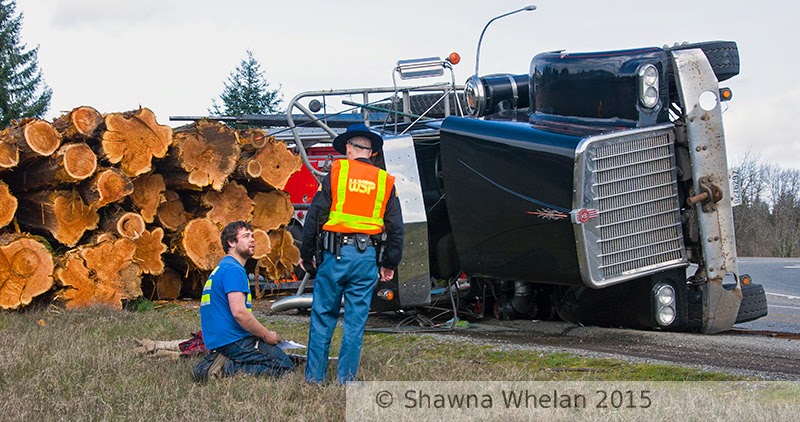 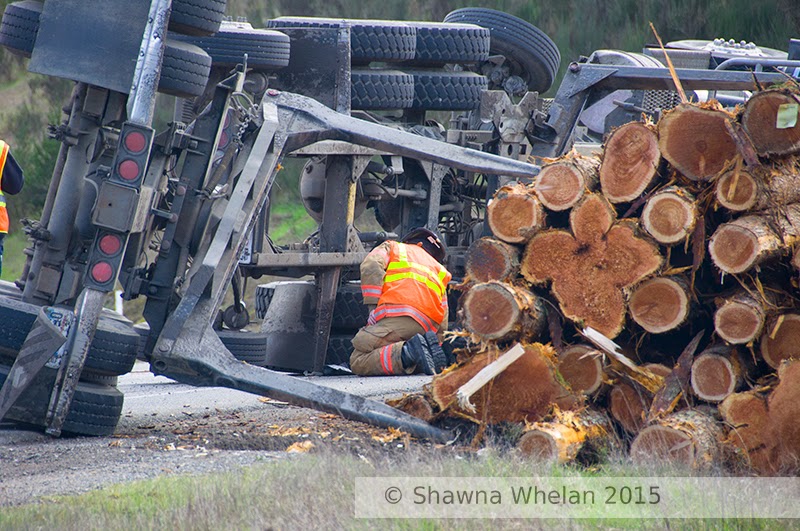 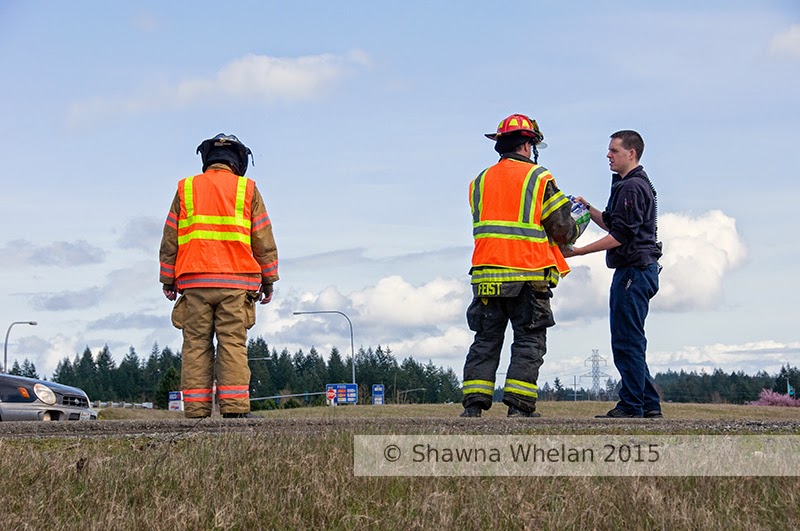 Log truck roll overs are not uncommon in this depressed little logging town.  This is the first one I have gone to photograph.  I know some of these would have sold if the local paper had not sent their own reporter to cover it.

I contacted a regional paper about buying these and they told me that they do not buy pictures from other photojournalists.  King 5 news liked the pictures and encouraged me to send them more pictures in the future but said they would not be buying my pictures today.

I was happy enough with my slow 200mm lens for this job.  I was actually pleasantly surprised with the zoom range it's been so long since I used my long lens.  I had really gotten used to only being able to zoom in to 50mm.  The 70-200mm f/2.8 is still just a distant dream.  I would be nice to have for photographing my kids soccer games though.

In the mean time I have booked a wedding gig.
at 2:19 PM No comments:

My lens was not set to vibration reduction and I could notice the difference in some of my indoor shots.  I had turned off the VR when I was using my camera on a tripod the day before.  There are so many things that need to be checked and reset at the start of each photo session.

Email ThisBlogThis!Share to TwitterShare to FacebookShare to Pinterest
Labels: Protests


There was a high bank behind the protesters that I stood on to get overview shots.  I was lucky that this car drove past while I was on the bank.  I was taking pictures of the protesters waving to passing cars and I did not see this special car until after I had taken two pictures of it.

Yes, I decided to photograph another pool protest. This protest was smaller and the light was really sweet. I had time to catch the overall mood of the protesters and to capture them from different camera angles. I did not use my flash at all, the lighting was just perfect. One thing that I like about photographing this group of people is that I can get their names later by asking for them on Facebook.

It's nice to be able to just take pictures and concentrate on the story and the artistry instead of frantically running around with a pen and a note book begging for people's names and hoping that I've spelled them correctly.

Sometimes the business of getting every ones name interferes with my photography.   There have been times that I've taken a good shot but could not get the names of the people in it because they left or I could not find them and that made the shot unprintable.  There are other shots that I never bothered to take because I knew I could not get the names to go with them and there are other times that I make sure to get more than three people in the shot so I don't have to ask for names.    With this group I can just concentrate on the photography and nothing else because I know I can get all of their names later on Facebook.


The sweet light was leaving but I took advantage of the last of it by shooting some silhouettes.  I'm not often out covering stories in the sweet light, so I tend not to shoot very many silhouettes.  I think this silhouette captured the mood of the somewhat deflated protesters who were disappointed with the small turn out.

For the next shot down I decided to  be a bit sneaky and shoot from the hip .  Normally I reserve shooting from the hip for street photography.  The newspaper wants all shots to be candid and they really like pictures of children.  A lot of children are right at my hip level, so I have to bend down to take eye level pictures of them .  Children are often very aware of me with my camera, especially when I crouch way down to take their picture, so it can be hard to get candid shots of children.  Children don't notice me quite as much when I shoot from the hip.  I predict that I will be doing a lot of hip shooting on future assignments.

I really like the intense look in this little boys eyes, the way he is holding the sign with his right hand clasped over his heart and the shadows in the background.

Email ThisBlogThis!Share to TwitterShare to FacebookShare to Pinterest
Labels: Protests
Newer Posts Older Posts Home
Subscribe to: Posts (Atom)
The previous theme of this blog was "Wandering the Empty Streets of Shelton Washington Looking for my Stolen Bicycle"